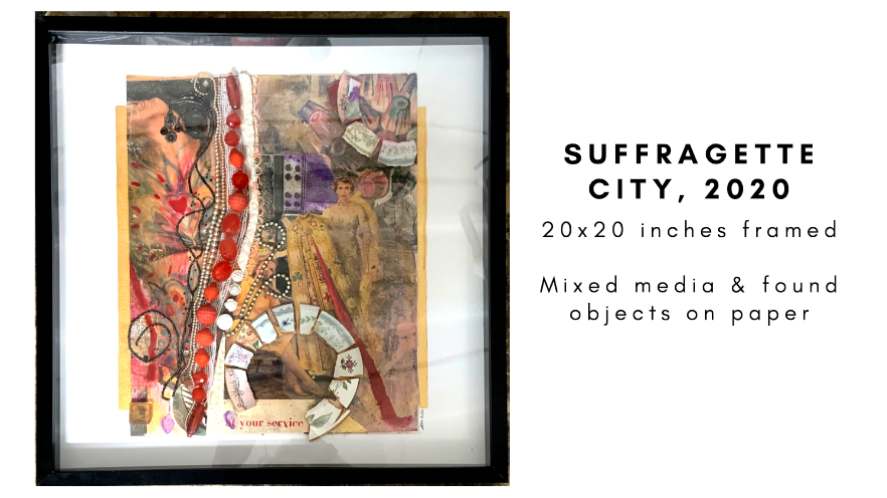 I’m a mixed media visual artist living in Miami, FL. I am one of the co-curators of the exhibition, along with fellow artist Maria Patino. We wanted to create an exhibition that gave women from various backgrounds, origins, and generations an opportunity to create work exploring the themes of voting, self-expression, agency, and empowerment.

19 - A Celebration of 100 Years of Votes for Women provided that opportunity, thanks to FIU Green Library and the 19 artists that participated.

The work that I created for this show is called Suffragette City, after the David Bowie song of the same title. I wanted the work to be filled with color and energy, and I wanted to feature strong women that broke with traditional images and ideals.

The work on paper started with two areas; on one side I showed the traditional woman of the 40’s and 50’s: women in the kitchen, incompetent women drivers crashing cars while backing out of their driveways, and manicured secretaries answering telephones. One key image that I really wanted to feature was that of a paper doll of Queen Elizabeth which was removed from a vintage 1953 women’s magazine; one of the most powerful people in the world was being crowned but the article chose only to highlight what she wore on her Coronation Day as the focus and the illustrations showed great detail of the luxurious robes and gowns.

On the other side, I had a wild 60’s go-go dancer in gold, a young Queen Elizabeth trying on her royal crown, and a gorgeous cut out of Diana Ross in her heydays - golden brown body in a tube top and body paint. These were fierce, brave women breaking out of the constricting roles of earlier years and claiming their power.

Eventually, the work took on a life of its own, as it often does. I didn’t want any one image to be too precious or more important than any other, and I eventually obscured most of the background images. Finally, I cut the artwork almost in half, leaving only the right side with a small portion of the left side intact. What you find now in the work is a bold string of vintage red beads cutting through the plane of the work, along with several other strings of beads and crystals.

The traditional images of femaleness peek through layers of paint, ink, and found objects including two plates, delicate china patterns that were smashed and reconstructed, suggesting that while the traditional roles of women may have changed, the femaleness is still whole and complete - just different.

If you look closely, on the left you’ll see the painted body of young Diana Ross, who looks out of the frame of the work, away from the more traditional female roles, to the dream of a better future for all women.

Thank you for your time in watching this video. If you have any questions about the work you can contact me at jean@warehouse4726.com

More information about the artist

Click here to return to the main exhibition page.