Brasis Brazil: The Arts and Crafts of Brazil 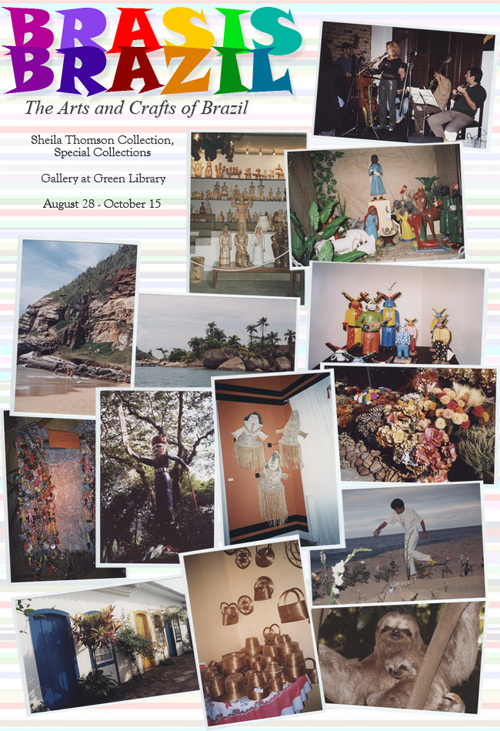 BRASIS/BRAZIL: The Arts and Crafts of Brazil

The Gallery at Green Library began this academic year showcasing the handicrafts of Brazil.

The exhibition Brasis/Brazil included ceramics from Pernambuco and Turmalina, Minas Gerais, lace from Alagoas, painted clay figures from The Paraíba River Valley, São Paulo and the Jequitinhonha River Valley in the state of Minas Gerais; basketry from Amazonas and Roraima, and table runners and weavings from Maranhão.    Also included in the exhibition were selected woodcuts by J. Borges.

Sheila Thomson was the Public Information Officer at the Wolfsonian-FIU. She has traveled all over Brazil, and maintains Maria-Brazil.org a website on Brazilian popular culture. Ms.Thomson has collected crafts, CDs, DVDs, books, woodcuts and other materials representative of Brazilian popular culture and chose to donate this collection to FIU before leaving Miami, because she felt “that these materials would be invaluable as teaching tools about Brazilian culture, music, folklore. The ceramics are very beautiful, the woodcuts are by a famous folk artist that was featured in the New York Times and is represented at the Museum of International Folk Art in Santa Fe, NM; some of the CDs are rare or very difficult to find, and the books (some out of print) would be fantastic research tools.”   Included is a collection of photographs taken of all the places around Brazil where the items were purchased.

The woodcuts, publication and handicrafts will be housed in Special Collections and the CD’s and DVD’s will be housed as a separate collection in the Sound & Images Department.  Following processing these will be available for use by researchers.