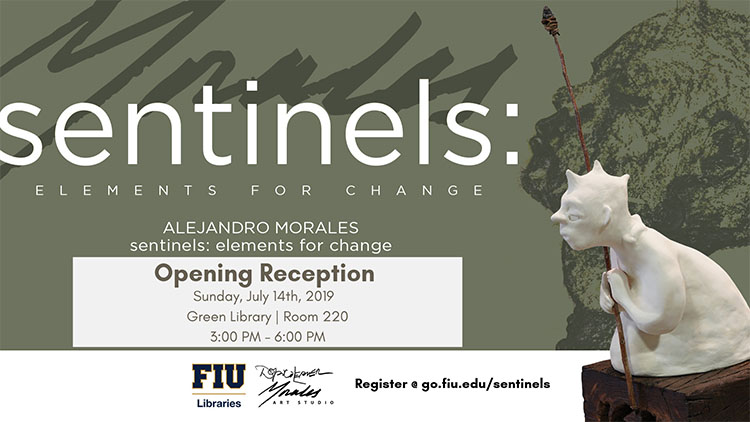 These are the spirits of the elements, the sentinels of time, rising to be heard and becoming the voice of justice for Planet Earth...Earth, this massive assemblage of energy, matter and frequencies which was divinely created is now in danger and it’s a matter of what we can do to restore it and rescue “IT’’ and ourselves.

“Sentinels: Elements for Change,” is a body of work inclusive of paintings, sculptures and installation pieces Alejandro Peewee Morales.

Inspired by the Yoruba Religion, the collection depicts Alex's vision of deities and icons being used as a method of expressing a plea of exoneration for the chaotic events happening around the world. This is his invocation to mother earth for regeneration for the sake of humanity through art.

Expressing himself through painted and drawn art renderings, Alejandro’s artistic inclination and eye for aesthetics became apparent at the early age of five.

In his career as a graphic designer, Alejandro emerged as a juggernaut and all around virtuoso in the advertising field. Boasting over a dozen ADDY Awards for his work both locally and regionally, Alejandro’s presence remained steadfast in both the Latin and general markets for three decades. Working his way up the latter, Alejandro would come to hold the title of Creative Art Director for Inter-American Communications - (IAC) Advertising, and later Trimention Advertising. His quality of work garnered attention throughout South Florida and landed him a feature in Who’s Who in Advertising Magazine among various other local print outlets in Miami.

Despite the success and demands of his work, the love of painting that began as a little boy never died. Alejandro continued painting along-side his graphic design career and since opening his Studio/Gallery, Dopico Lerner - Morales Art Studio at the Bird Road Art District, is newly committed to his artwork.